Despite camp closures, color war is still on - for the grown-ups 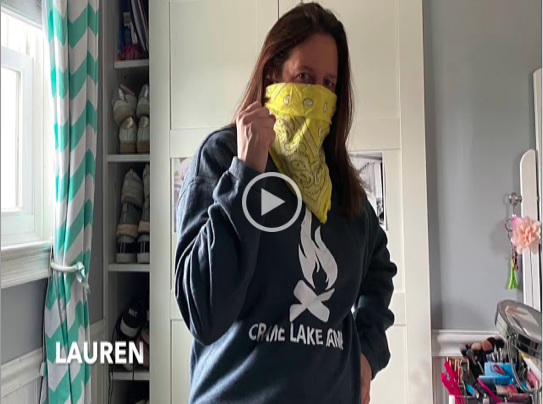 Lift weights using the wackiest objects you can find in your home. Stage a puppet show for a friend’s kid.

Take a snapshot of yourself enjoying a bubble bath (but just the toes, please). These are just a few of the challenges you might face as a participant in Expedition Nai, an online competition that recreates color war, one of Jewish summer camp’s central rituals — with adults as the players.

Color war — or as it’s often known in Jewish summer camps, Maccabiah — is the climactic event that brings a camp session to its close. Campers split up into teams and nearly every activity becomes an opportunity to win or lose points. Besides facing off in relay races and dance battles, teams compete to scrub their bunks more scrupulously than their rivals and to out-sing them during Kabbalat Shabbat services.

But some Jewish kids love summer camp so much they keep on going, even when they’re all grown up. For Moishe House, an organization cultivating Jewish engagement among young adults, one of the year’s biggest events is Camp Nai Nai Nai, a series of four-day retreats that replicate camp atmosphere for adults seeking to indulge their nostalgia. As coronavirus scuppered in-person summer plans, Camp Nai Nai Nai Director Lisa Klig looked for a way to take at least some of them online.

“We thought, what is the most iconic aspect of Jewish summer camp? It’s color war,” Klig said.

Typically, color wars play out in close quarters over a few fervid days. In launching Expedition Nai, Klig and her colleagues had to transfer that intensity to a competition that spans four weeks and occurs in kitchens and living rooms around the world. The challenges they’ve devised can all be completed without violating social distancing guidelines. Teams may be asked to recreate a famous painting or trending TikTok video, give someone an at-home haircut, or organize a virtual Shabbat gathering. Submitting proof of accomplishment through photos and videos, they accrue points for each challenge completed.While the decision to cancel camp was a rough one, Klig tried to view the shift online as a way to reach more people. Previously, summer retreats attracted young North Americans, many with a long history of involvement in Jewish institutions. Now the free contest boasts teams from 28 countries, with members up to 75 years old. A survey of participants that because of the competition, half had tried out a Jewish ritual they’d never done before.

One of those people is Talia Shapiro, a Los Angeles-based crisis counselor competing in Expedition Nai with her fiancé and another couple. A recent challenge asked her to learn about a holiday she didn’t know much about, Lag B’Omer. What she learned — that the holiday marks a transition from spiritual darkness to light, and is typically marked with bonfires and weddings — resonated strongly, since Shapiro is currently planning a wedding in the midst of a pandemic that renders all events uncertain.

“Little did I know, this would totally change my perception of quarantine,” she said.

To complete the challenge, Shapiro and her husband had to celebrate the holiday in an “unusual” way. The couple a video of themselves practicing their wedding dance in their living room. The quarantine-era adaptation of a traditional ritual gave her a sense of peace. “We put out our positive energy, and the knowledge that [the wedding] will be great, no matter what it looks like,” she said.When they’re not trying outdo their rivals, participants can meet them through virtual flagpole meetings or “playshops” (absolutely no work involved, Klig stressed) that teach improv comedy, the history of laughter in the Talmud, and meditation.

Lauren Chizner, Long Island-based Jewish educator, recently found herself at one such flagpole meeting, “passing” a spoon between frames of a Zoom call in a quarantine-era take on a conventional relay race. It was just a few weeks after Chizner learned that Crane Lake Camp, where she’s led Jewish education for fourteen years, was cancelled for the summer.

Chizner banded together with four other Crane Lake staffers, all mothers, who named themselves the Red Hot Mamas. Ranging in age from 40 to 60, the Mamas are a little older than most Expedition Nai participants — but Chizner said they had a long history crushing opponents at Crane Lake Camp dodgeball tournaments.

“In our typical ‘mom’ way, we looked at all the challenges and made a spreadsheet to divide and conquer,” she joked.

In fact, while Expedition Nai’s challenges are pitched towards younger adults who are fluent in TikTok lingo and willing to do at-home parkour, the color war has also been a source of inter-generational bonding.Naomi Izen, 29, is competing alongside her parents, Myles Kleper and Judy Izen, both in their seventies. While Izen doesn’t visit her parents inside their home, on a recent sunny day all three enjoyed a socially-distanced dance-off with a neighbor in the yard. Later, she cracked up while uploading a video of her father performing a new Olympic sport he’d invented for one of the week’s challenges. The goal? Gargle a big mouthful of salt water — and spit it as far as possible.

“Normally my dad doesn’t go outside the box. He has his routines. But these challenges have just expanded all these new things that he can do,” Izen said. She added that Kleper had grown up in a family without the means to send kids to summer camp. “Now, at 70 years old, he’s able to have this experience,” she said.