CUTTING-EDGE TECHNOLOGY PRESERVES MEMORY OF HOLOCAUST IN A NEW WAY 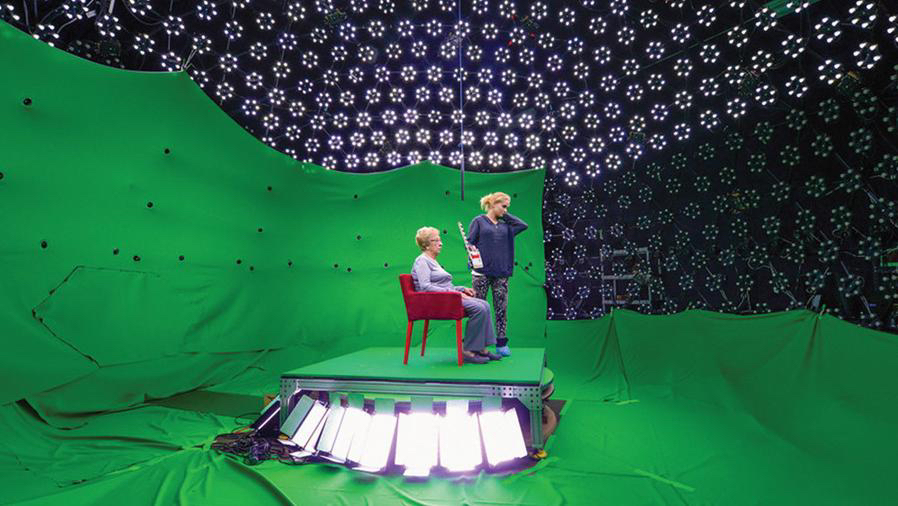 Future generations will be able to gain insight by interacting with three-dimensional projections of survivors.

While most people are familiar with the figure of six million Jews who were murdered in the Holocaust, many are not aware that close to a third of that number were Soviet citizens who lived in the Soviet territories before 1941. This number included those Jews living in the territories of western Russia, Belarus, Ukraine, Moldova, as well as the Baltic states which were annexed by the Soviets in 1939-1940. Many were killed as the Nazis passed through towns and cities as part of their occupation of Soviet territory, which began in June 1941. After World War II, Soviet historians and officials largely ignored and suppressed discussion of the Holocaust in the Soviet Union as a uniquely Jewish occurrence.

An innovative partnership between Genesis Philanthropy Group (GPG) and the University of Southern California Shoah Foundation will attempt to make people better aware of what actually happened to the Jews of the Soviet Union during World War II and enable the vital testimony of Russian Jewish survivors of the Nazi Holocaust to live on for decades to come. For the first time, the Shoah Foundation’s Dimensions in Testimony project, which integrates advanced recording techniques to create three-dimensional projections of survivors that recount their experiences and answer questions from real-time interviews, will document the experiences of Russian-speaking Jews who lived in the USSR during the Holocaust period.

Genesis Philanthropy Group, which initiated the collaboration, is committed to ensuring Jewish cultural heritage and values in Russian-speaking Jewish communities around the world. GPG intends to disseminate the story of the Soviet Jewish experience during the Holocaust to a wider audience with the use of this groundbreaking technology.

“For me, as a son and grandson of Holocaust survivors, this unique project holds an immense personal importance,” said Mikhail Fridman, co-founder of GPG. “It is an opportunity to preserve for posterity not only the horrifying tragedy of Soviet Jewry in the Holocaust – which remains even to this day one of the less-known aspects of the ‘Final Solution’ – but also to give voice to those valiant Jewish warriors, partisans and ghetto fighters who did their part to bring about the victory over Nazism.”

Two individuals from the former Soviet Union – a Holocaust survivor and a Red Army veteran – will be selected over the next several months to submit their testimonies to the Dimensions in Testimony project. They will provide the first Russian-language narrative of the Holocaust for the project, and will, for the first time in the program’s history, shed light on the memories of the Holocaust in the former Soviet Union.

Ilia Salita, president and CEO of GPG, said that the collaboration between the two organizations is an important step in remembering a vital piece of history.

“For Genesis Philanthropy Group, this partnership with USC Shoah Foundation is a logical next step in our long-term commitment to preservation of the memory of the Holocaust in the former Soviet Union and the stories of the Soviet Jews who fought the Nazis,” Salita said. “This effort is especially important now, when the world is experiencing a rise of violent antisemitism around the world. The cutting-edge technology employed to create these interactive testimonies will make them accessible and relatable to younger generations – to those, who, as the time passes, will not have the opportunity to meet living survivors of the Holocaust.”

Before World War II, three million Jews lived within the borders of the USSR. Half were murdered in the Holocaust, and more than half a million fought in the Red Army. As the last remaining survivors pass from the scene, the number of eyewitnesses to these events is rapidly diminishing. The upcoming Russian-language interactive experience of the Dimensions in Testimony project will enable future generations to “communicate” with the past and will help ensure that these tragic events as well as the bravery of the Jewish fighters will not be forgotten.

Stephen Smith, executive director of the USC Shoah Foundation, explains that the Russian-language testimonies will increase and amplify the meaning of the Holocaust.

“Dimensions in Testimony in Russian will change the landscape of Holocaust remembrance and education, bringing whole generations and new communities closer to history through technology. We often hear survivor stories from Poland, Germany, Czechoslovakia and Hungary, which have largely defined the experience of the Holocaust to the English-speaking world. The stories of Holocaust victims and survivors within the former Soviet Union are essential for all audiences to better understand the history and ramifications of this mass atrocity.”

Participants in the Dimensions in Testimony project answer approximately 2,000 questions over 20 hours of interviews, recorded by 116 cameras. Over time, the video recordings of the survivors “learn” from interactions with interviewers, and the resultant interviews become progressively more lifelike. The project utilizes natural language technology, which allows people to engage with the video testimonies by asking questions that trigger relevant responses. The ability to “interact” with survivors, and ask questions, even in this virtual manner, will provide students with a deeper understanding of the Holocaust than they would learn from a history book.

For many, the tragic events of the Holocaust serve as the foundation for modern Jewish consciousness and awareness. It is important, therefore, for members of the Russian-speaking Jewish community and the Jewish world at large to be aware of the scope of the Holocaust in the Soviet Union. Genesis Philanthropy Group’s partnership with the USC Shoah Foundation will further this cause – completing the story of Jewish tragedy and heroism and making it accessible and relevant for Jewish generations to come.