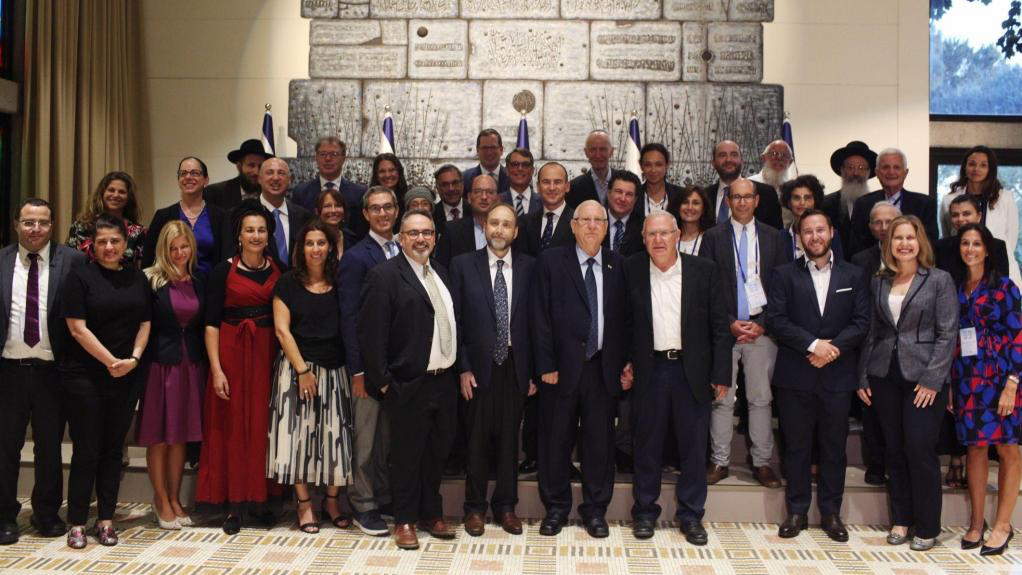 Never before have Jews – as individuals and communities – faced so many opportunities and had so many true friends.

The 21st century Jewish world is a sea of languages, traditions, cultures and convictions. Even as we face renewed antisemitism across the globe, we have never before been so free to pursue our goals and to engage with non-Jews without expectation of assimilation. Never before have Jews – as individuals and communities – faced so many opportunities and had so many true friends.

Yet this wealth of possibilities creates its own challenges. Our communities are like boats in a vast sea – and it’s easy for small boats to drift apart in the open ocean, each following its own winds and currents. Our challenge is: How do we stay united? How do we take the foundations on which our peoplehood is based – our faith, our ethics, our history, our love for Israel – and build upon them a lighthouse so tall and so strong that all of our boats will see and be guided by it? How do we define our common destiny?

This is the task that we at Genesis Philanthropy Group, along with our partners at the State of Israel and the Office of the President of Israel, have set before ourselves with Our Common Destiny initiative and the declaration that launched this month by the President of Israel, Hon. Reuven (Ruvi) Rivlin. This effort, Our Common Destiny, seeks not only to bridge the rift between Jews in the Jewish State and Jews of the Jewish world, but to find a path forward out of the labyrinth of divisions that threatens to sap our energies, distract us from key issues of our future and set us against one another.

I admit that this is not the first time that a group of passionate Jews has launched a program, a plan, or a proposal to achieve unity – so it also matters that this initiative is different from those that have preceded it.

I believe our greatest difference lies in the choices we’re making. First and foremost, we’ve chosen to draw on new, often-untapped resources as we shape the initiative and its goals. Rather than turning to those who do the important work of communal organizing in the Jewish world, or to those who carry the burden of elected representation in the Jewish State, we’ve turned to a broad and inclusive range of Our Common Destiny Scholars, thought leaders and activists of diverse backgrounds, who hail not just from two or three familiar communities, but instead from six continents.

Our initial declaration of purpose is now out in the world, where it will be subject to wide-reaching debate, a sort of public hearing – discussed, deliberated, and scrutinized by all who have a stake in Jewish future.

We don’t fear this scrutiny – indeed, we welcome it. We want the feedback of leaders of Jewish organizational life, of rabbis and academics, of community activists, of student organizers, of those who are affiliated and those who are not. In other words, we invite everyone – and let me be perfectly clear: everyone – who is passionate about a Jewish future to take part in this effort, and to make it better by sharing their perspectives, experience, and vision. The goal, as ambitious and daring as it may seem, is to reach every Jew, everywhere, to create an unprecedented example of crowdsourcing of Jewish experience. And that, too, is a crucial choice that we’ve made.

The goal is grand, because the need is great – but we know that it’s not only necessary, but also achievable. We have faith in our capacity as a people to come together and build a strong shared future.

Moving forward, this initiative will rely on Our Common Destiny Scholars and Advisory Board to aid us in growing the declaration from birth to adulthood. We look forward to further guidance from Lord Jacob Rothschild, bestselling author from France Eliette Abecassis, Rabbi Lord Jonathan Sachs, preeminent American Jewish historian Prof. Jonathan Sarna, an inspirational Rabbi from Argentina Sylvia Chemen, a leading Israeli public intellectual Dr. Micah Goodman and many others whose commitment to this project has been unparalleled. In its final form, the Declaration of Our Common Destiny will serve as the foundation for a worldwide movement to shape how future generations of Jews, within Israel and worldwide, across spiritual and cultural identities, relate, empower, and engage with one another. Make no mistake, we are building a lighthouse, as tall and as strong as it can be, so not a single boat, not a single Jewish community is lost on a way to a united Jewish future.

Some might call us naïve, or audacious. All of that may be true. But one thing is certain – we are dreamers. We believe that if you don’t dream big, if you never dare to accomplish the seemingly impossible, you’ll never achieve your highest aspirations.

We envision a prosperous Jewish world rebuilt on a new foundation of shared ethics, values and priorities, of harmony between Israel and the Diaspora, of mutual respect and common purpose, of robust identities and connections. We see our eternal people – strong, confident, united – continuing our mission to be the light onto nations, for the benefit of all mankind.

We believe that is a dream worth dreaming.

By Ilia Salita, president and CEO of Genesis Philanthropy Group, a foundation supporting projects and institutions that develop and enhance a sense of Jewish identity among Russian-speaking Jews worldwide.