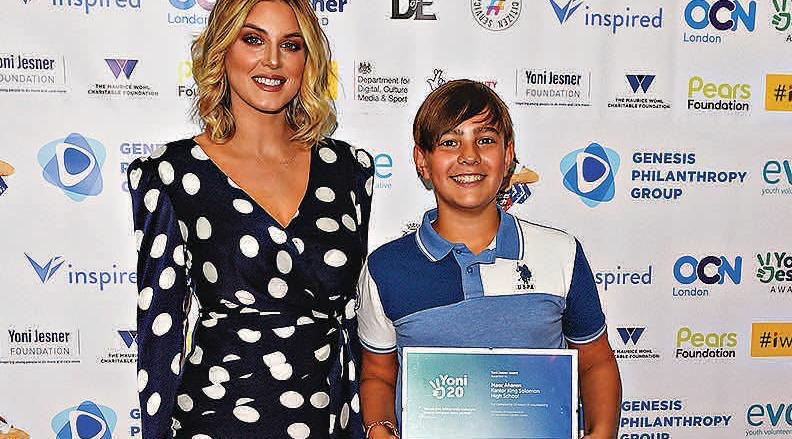 The size and spectacle of the event, for which Jewish News was media sponsor, underlined the “game-changing” nature of the new youth eVOLve volunteering programme led by JLGB.

The size and spectacle of the event, for which Jewish News was proud media sponsor, underlined the “game-changing” nature of the new youth eVOLve volunteering programme led by JLGB.

The event, supported by Genesis Philanthropy Group, was open to all young volunteers who completed a JLGB volunteering award on the online platform, together with their friends, families and supporters.

Chief Rabbi Ephraim Mirvis was there to congratulate all the young volunteers for their acts of kindness and service, together with JLGB president Lord Levy.

“What a fantastic evening, what an incredible performance from Craig David and what phenomenal young volunteers we are blessed to have,” said Levy.

“I am in no doubt that the future of our community is in safe hands. This is just the beginning. Thanks to our donors, the expansion of eVOLve will mean 2,000 new opportunities created for thousands more young volunteers, meaning none of our charities should be short of volunteers again.”
He added: “The potential collective impact of the next generation is remarkable, with over 450,000 volunteering hours being offered to our community through eVOLve. I urge us all to harness it.”

Marsha Gladstone, mother of Yoni Jesner, spoke movingly to the hundreds of volunteers present who achieved the Yoni Jesner Award on eVOLve.

Yoni devoted his free time to helping others before his life was tragically cut short by a suicide bomb attack on a Tel Aviv bus in September 2002. Since then, thousands of young volunteers have been inspired by Yoni’s example.

He said eVOLve had been “a game-changer for youth volunteering and engagement in the UK,” adding: “We look forward to its continued expansion, so that even more young people have a chance to explore their Judaism through social action.”

JLGB youth trustee and co-presenter of the Volunteer Celebration, Jordana attended her first JLGB camp in 2014, aged 15. Now aged 20 and studying at Cambridge, she has taken on leadership roles within JLGB, including co-chair of the Voice Youth Forum and leader of the productions team on winter camp.

She got the Duke of Edinburgh’s Bronze Award with JLGB and completed 500 hours of volunteering as a JLGB leader, winning the vInspired volunteering award in the process, and says she has changed a lot since that first camp in 2014, and Israel Tour the following year.

“When I first went on a JLGB camp, I was quite shy and reserved,” she said. “JLGB leaders helped me to grow my confidence. I started to develop my leadership skills and take on new roles. At every level, I was helped to develop as a person and a young leader. Through JLGB training weekends, I learnt how to give presentations, motivate people and develop resilience.”

Hasmo student Rafi, who is in his bar mitzvah year, achieved the Yoni Jesner Award by helping families in need of additional support in Borehamwood and Edgware. This included 35 hours of volunteering as part of GIFT’s Shabbat Walk initiative, which matches young volunteers with opportunities to visit families with financial difficulties or children with additional needs. The award completed, he still volunteers with the families, helping with homework and giving the parents a well-earned break.

“Yoni Jesner paved the way for me,” said Rafi, referencing the gifted Jewish student from Glasgow who was 19 when he was killed in a terrorist attack in Israel while studying in a yeshiva during his gap year. “He used to volunteer a lot and helped me realise the good you can do with your time.”

As part of the National Citizen Service award, 16-year-old Aranda launched a photography exhibition aimed at improving self-esteem among young people. This was a creative response to the issues of negative body image that are associated with images on social media.

Aranda worked with Autograph ABP, a charity that explores issues of identity and human rights through photography, to create the exhibition, and said it was “amazing to be able to work creatively with people from different places”.

Yona is a student at Immanuel College and through the National Citizen Service programme she was given the chance to visit The Hive and Sport England to learn about discrimination in sport.

Following her visit, 16-year old Yona ran a sports fair to dismantle stereotypes that position sport as a ‘man’s game’ and to encourage women and girls to get actively involved.

She also regularly volunteers as a leader at Hampstead Garden Suburb Synagogue’s Bnei Akiva Tribe (BAT) youth group, helping to run fun and engaging activities for children in years 6 and 7 on Shabbat afternoons.

Jude is a volunteer sports coach for the Duke of Edinburgh Award, about which he is passionate. “The most important lesson I have taken away from the Duke of Edinburgh’s Award is the value of volunteering,” said the 16-year old student. “There is nothing more invigorating than seeing the people that you help with a smile on their face. The happiness that you can bring, is amazing.” He worked with young autistic children, which he described as “an incredible experience,” adding: “I helped them they were part of a community. Everyone should do the Duke of Edinburgh’s Award. The programme gives you a real sense of purpose.”