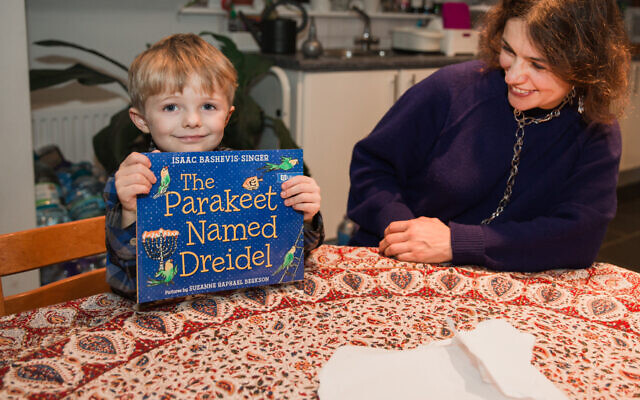 PJ Library in the UK marks landmark in project which has now reached more than 7,500 young people across Britain.

A charity which sends free Jewish children’s stories to families each month, has distributed its 200,000th book in the UK.

The scheme, which is the brainchild of Jewish-American philanthropist Harold Grindspoon, was launched in 2015 and has now reached more than 7,500 young people across Britain.

The youngster’s mother Irina moved to the UK over 10 years ago after growing up in the Soviet Union. She said: “The Russian Jewish community is different as we are connected on an unusual level. Many don’t speak Hebrew or follow classic Jewish traditions.”

I love to read the books at home as it helps to teach and reinforce Jewish stories at reading time.”

The book was delivered by Marina Yudborovsky, Director of Strategy and Operations at Genesis Philanthropy Group (GPG), and Tamar Remz, Chief Partnerships Officer of the Harold Grinspoon Foundation.

Since 2018, GPG has supported PJ Library in the UK, helping to fund the distribution of books to families, including in areas with small communities, as well as to Israeli, Russian and French-speaking families.

Lauren Hamburger, Director of PJ Library in the UK, said: “We are delighted that PJ Library has grown so quickly here in the UK, mirroring the programme’s fast growth in the rest of the world.”

Books like The Parakeet Named Dreidel are being sent to children in over 21 countries, enabling families to discuss Jewish values and ideas.”

Marina Yudborovsky said of the landmark “we want to ensure that, regardless of where a family lives or what language they speak, every Jewish child in the UK is provided with the opportunity to learn and be inspired by outstanding Jewish books”.