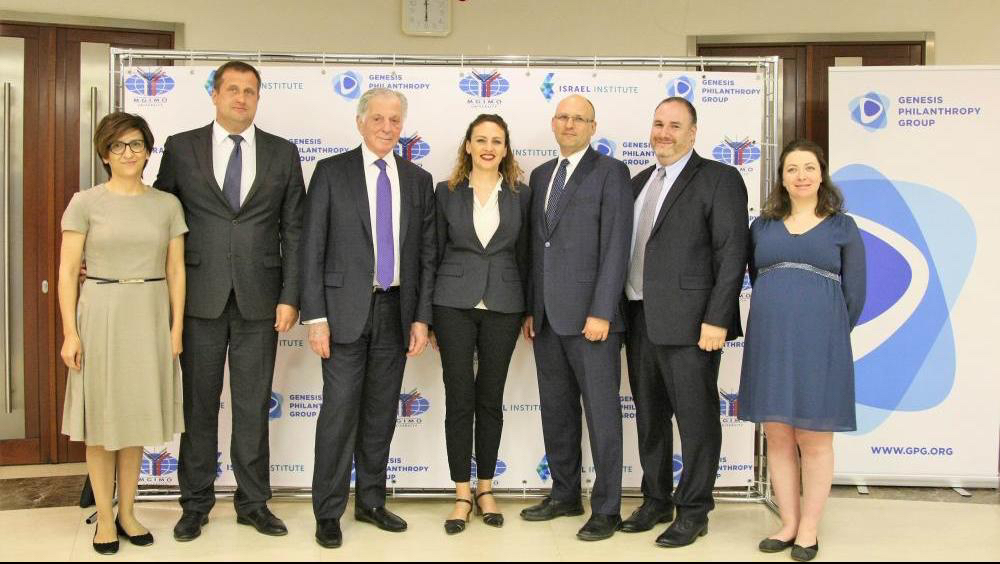 Last month, representatives of the Israel Institute, Genesis Philanthropy Group, the Israeli embassy, and the Moscow State Institute of International Relations (MGIMO) gathered to celebrate a successful run of the Russian university’s first-ever dedicated course on Israel. The course, entitled “Modern Israel: Key Topics in Israel Studies,” ran from February 19 to May 28, 2018. Plans are already in place to run a second course in the Spring 2019 semester at MGIMO, considered Russia’s top school of international studies.

The course at MGIMO, which was developed by the Israel Institute and hosted by MGIMO’s international studies department, was made possible by a generous grant from the Genesis Philanthropy Group (GPG). The launch of such a course in Russia, the Institute’s first such initiative in the country, constitutes a substantive expansion for the reach of Israel Studies in Europe. Moreover, Israel as a topic of study at an institution of higher learning such as MGIMO is particularly significant. As Israel Institute President Amb. Itamar Rabinovich noted, “MGIMO trains many of the future thinkers and leaders of Russia. Running a course on Israel at such an elite Russian university is path-breaking.” The school, where previous courses on the Middle East did not grapple with Israel in an in-depth manner, is home to an academic cohort that is simultaneously highly motivated and has likely encountered a dearth of information on Israel beyond news headlines or popular discourse. The impact of comprehensive academic engagement at a university like MGIMO can thus have a far-reaching and long-term impact on understanding and knowledge of modern Israel among an important new cohort of learners.

“This initiative gave us an opportunity to address the growing interest in Israel’s story and reality among Russian Jews, as well as non-Jewish students in Russia,” said Natalie Shnaiderman, Director of Global Grantmaking of the Genesis Philanthropy Group. “It’s important that members of the Russian academic community have the opportunity to delve into the intricacies of Israeli history and its impact on the world. We are thrilled to contribute to and further the study of Jewish and Israeli learning in one of the Russia’s most prominent institutions of higher learning.”

The course at MGIMO “demonstrates the vast impact that a community-based partner can bring to issue-specific work done by an academic nonprofit such as the Israel Institute,” said its Executive Director Dr. Ariel Roth. “GPG was a great partner for us. Their local knowledge and passion for sharing learning about Israel were indispensable in making this course the success that it was.”

The course was designed with the understanding that there has never been a dedicated class on Israel taught at MGIMO. For this reason, it was conceived as a semester-length survey class serving as a comprehensive and rigorous introduction to Israel. Lecture topics included Zionism and the birth of the Jewish state; Israel’s social makeup; Israeli technological innovation; Israeli security challenges and defense strategy; Israeli diplomacy and negotiations; and Israeli-Russian relations, among others. Each of its eight seminar-length lectures was taught by a different expert, including Brig. Gen Itai Brun, former head of the Israel Defense Intelligence (IDI) Analysis Division, and Amb. Zvi Magen, Israel’s former ambassador to Russia, as well as Roth and Rabinovich from the Israel Institute. Roth described teaching and planning the course at MGIMO as “a phenomenal experience. The students were exceptionally well prepared and inquisitive and eager to learn about Israel beyond the headlines. We were welcomed enthusiastically by the MGIMO rector and, by the end of this course, I consider Vice-Rector Artem Malgin both a colleague and a friend.”

Beyond the course itself, the Israeli embassy in Moscow was able to leverage visiting lecturers as a resource in the community as speakers on their topics of expertise. For instance, Prof. Gad Yair, an expert in Israeli culture and sociology, gave a lecture at Tomsk University on the topic of Israeli high-tech and innovation culture, followed by a meeting with local leaders and academics at the Innovation Center in Tomsk.

The course at MGIMO is part of a broader Israel Institute initiative – its international course program, which brings high-level content on Israel to universities across Europe. In European countries, most higher education institutions do not have full-time faculty capable of teaching about Israel. This creates barriers for both curious learners and the actively misinformed to gain knowledge of the country. For this reason, the Institute has developed a unique external intervention that enables Israel-focused content within the bureaucratic parameters of the European university system: intensive courses on Israel led by outside academic experts. These intensive courses bring specialists from Israel and the United States to a target campus to teach about various facets of contemporary Israel; these classes are coordinated in concert with interested local instructors who do not have the capacity, without our external intervention, to teach this academic content. The intensive course model, which we have run at over a dozen universities in ten European countries, has allowed us to overcome structural barriers to Israel education and reach over a thousand students who would otherwise not have had access to course content about Israel. They have also allowed us to build relationships with local academics and plant the seeds for more institutionalized academic access to Israel content on these European campuses.

We are very grateful that the close cooperation with the Genesis Philanthropy Group enabled us to extend our international course program to Russia and are extremely excited about the opportunity to continue to partner with GPG and MGIMO as we develop a second Israel Studies course there next year. We believe that this type of initiative is critical in advancing the important work of increasing access to Israel content and enhancing knowledge about modern Israel in Russia.