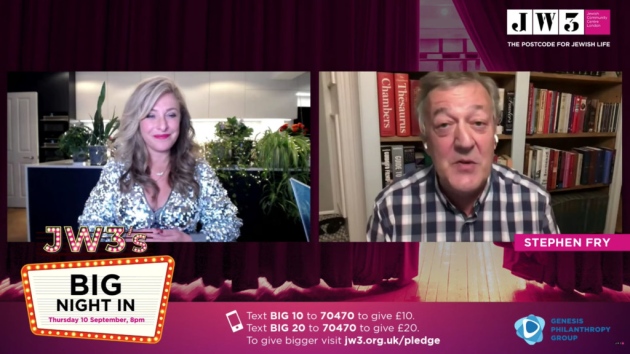 An estimated 50,000 viewers tuned in for ‘The Big Night In’, a star-studded online event which went a big way to securing the long-term future of JW3, whch is based in Finchley Road.

Hampstead actor Tracy Ann-Oberman hosted the show on September 11, which featured a series of talks and performances including by actors Jason Isaacs and Mark Heap, and the composer Stephen Schwartz.

Producer Mark Ronson talked about his friendship with the late Camden singer Amy Winehouse, while the Hampstead-born Stephen Fry discussed the power of the arts and the need to be “vigilant” about antisemitism in contemporary culture.

Boy George spoke of his collaboration with Israeli rapper Asaf Goren and gave an exclusive performance of I’ll Tumble 4 Ya from Culture Club’s multi-platinum debut album.

JW3’s chief executive Raymond Simonson said: “The real reason here is to raise some important funds for this unique charity, the only Jewish community centre and venue for arts and culture of its kind in the UK.“JW3 brings people together across the divides. Sadly, this pandemic and particularly the lockdown period has cost JW3 over £1.5 million. And the need for our services and activities has never been greater.”

On the night, Genesis Philanthropy Group match-funded £100,000 of donations. Its co-founder Mikhail Fridman, who lives in Hampstead, said: “JW3 is a very important focal point of the Jewish life of London and more broadly the UK.

“It is also a personal matter for me, because I live in this neighborhood and remember very well an unforgettable evening with my friend and hero Natan Sharansky on stage at JW3.

“Part of Genesis Philanthropy Group’s mission is to create meaningful and innovative opportunities for Jewish engagement in the UK.

“That is why we do everything we can so that JW3 not only survives, but thrives, and can continue to provide all of its outstanding programmes that contribute to a vibrant British Jewish community.”