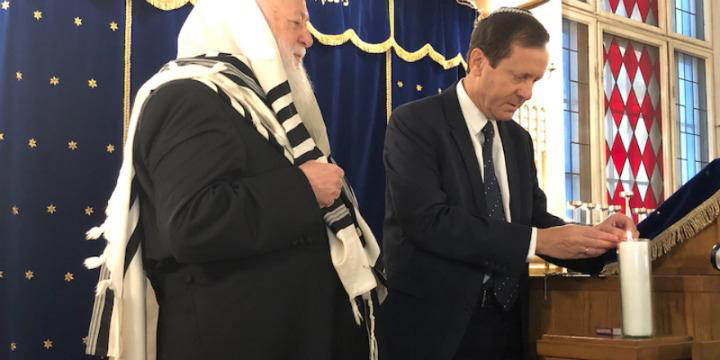 It’s been 81 years since Kristallnacht (“The Night of Broken Glass”), when Nazis torched synagogues, vandalized thousands of Jewish homes, schools and businesses, and killed nearly 100 Jews on the night of Nov. 9-10, 1938...

in what was a precursor of things to come in Germany. In the aftermath, some 30,000 Jewish men were arrested and sent to concentration camps.

On Thursday morning at the Central Orthodox Synagogue of Berlin, Jewish Agency chairman Isaac Herzog lit a yahrzeit candle in memory of those who were brutally tortured and killed in the urban pogrom.
Together, Herzog and the rabbi of the Berlin synagogue, Yitshak Ehrenberg, then recited the mourner’s Kaddish in remembrance of those systematically murdered in Holocaust.

“This Shabbat marks 81 years since Kristallnacht. It is inconceivable that today Jews need to remove their kipah in order to walk the streets of Europe,” said Herzog at the synagogue. “In this place, thousands of Jews prayed. … These walls speak of emotions, telling the story of a community that turned to ashes, and stood up again and was revived.”

During the World War II, the Central Orthodox Synagogue of Berlin (Joachimstaler Strasse Synagogue) originally housed the B’nai B’rith lodge of the city’s Jewish community and was later converted into a Jewish school. The synagogue, according to Ehrenberg, was one of the main locations in the city where yellow stars were distributed to Jews for identification. In 1942, after the mass deportation of the Jewish community, the Nazis took over the building and turned it into a sports arena.

The synagogue, unlike most of the others in Berlin, was not destroyed by the Nazis and after the war was returned to the Jewish community. It housed administrative offices, several Jewish organizations and the Jewish newspaper at the time, Jüdische Allgemeine Wochenzeitung (now known as Jüdische Allgemeine Zeitung).

Today, the Joachimstaler Strasse building is home to an Orthodox congregation, residential apartments and several Jewish youth organizations. Ehrenberg has been the synagogue’s head since 1997.

He noted that about 80 percent of the local Jewish community consists of Jews from the former Soviet Union. About 200 people attend weekly Shabbat services, with as many as 1,000 arriving for major holidays such as Yom Kippur.

“There is a special energy here. Without a doubt, the story affects the energy here,” the rabbi told JNS. “It’s a living and happy place,” he said, noting that even Israelis who have emigrated “find a place here to feel good and at home.”

Ehrenberg was born in Jerusalem, where his family dates back 200 years. He said he chose to move to Berlin in 1996 at the recommendation of his rabbi, who had lost family in the Holocaust.

Currently, the chief Orthodox rabbi and head of the rabbinical court (Av Beit Din) in Berlin, he served as the chief rabbi of Munich from 1989-1997 and as rabbi of the Mizrachi community of Vienna from 1983-1989.

He co-founded the Orthodox Rabbi-Conference of Germany in 2003, an organization whose goal is to facilitate the cooperation of German rabbis for a continuous development of Jewish Orthodox life in Germany.

According to Natalie Shneiderman, director of Global Grantmaking for the Genesis Philanthropy Group, each Jewish community and organization in Berlin will mark pogromnacht (what German Jews call Kristallnacht) on Friday or Sunday.

Nevatim, an educational program that supports educational initiatives of young Jews in Germany, Austria and Switzerland, will mark the day on Shabbat. “Every Jewish community has a remembrance ceremony, almost without exception,” she told JNS.