Ambassadors to Ukraine: Together as One 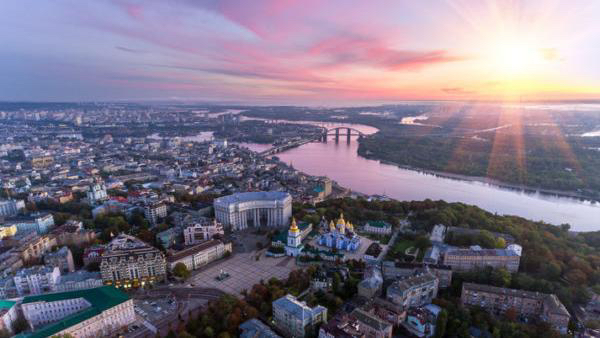 Five hundred teens. Fifteen countries represented. Dozens of languages. Four days. One community. One religion. And an event that none of us will ever soon forget.

Judaism brought us all together in Ukraine. Each prayer we chanted established a bond between everyone in the room. The glimmer from the Havdalah candle radiated into our hearts. The sounds of the guitar vibrated through our skin. The cool breeze from our swaying wafted through our hair. It was an indelible moment at the Active Jewish Teens International Convention in Kiev, Ukraine, where I and other Jewish teens from North America represented BBYO.

I had no idea what to expect before I headed over to Ukraine, where we for the first time met a United Nations of Jewish teens from the former Soviet Union. I had no idea that over the next seven days would have such a profound impact on me. The first day at Babi Yar, the site of a Nazi massacre — walking on the same path where 84,000 of our ancestors perished not that long ago, that made so concrete, so real all that the Jewish people have suffered during our history.

As I stood there in prayer with 20 other teens I had just met, I felt as though we were together as one, that all the awkwardness of getting acquainted had immediately evaporated. And from that place of death and horror we went to the local shul. The move from a site of devastation and destruction to one of hope and community was moving. All I could think about in those moments of singing and dancing was the immense pride I felt. Only a few decades prior, Jews were not able to freely pray and dance anywhere, let alone be in a synagogue. Ever since the fall of the Soviet Union, Jewish life has resurged, blossomed again, in the countries that once lived under Communism.

We went everywhere in Ukraine, and I felt like I got a real sense for the country, and for the Jewish community there. We danced with the elderly at Chesed, took fun pictures in the photo illusion museum, learned about Hillel and the JCC in Kyiv, and watched a ballet. While in Kyiv, I found myself immersed in the culture. Every bus ride, every walk, I would find myself just looking around. Whether it was the local architecture, or the way Ukrainians park on the sidewalks, it all amazed me.

When we finally arrived at the conference, where 500 Jewish teens from across the world gathered in Ukraine to celebrate Judaism, I was nervous because I didn’t speak any Russian and I didn’t think others would speak much English. Right away, though, I was warmly welcomed by hundreds of Russians, Ukrainians, Israelis, Lithuanians and other Jewish teens from around the world. Experiencing Havdalah together, forgetting about any social, political or language barriers between us, was a moment unlike anything I’ve experienced in my life. Judaism truly is a bond that extends beyond words, and beyond national barriers.

My experience in Ukraine opened my eyes up to the world. I never knew what Jewish communities looked like outside of my own in a small town in Pennsylvania. It was a once-in-a-lifetime trip that I wish everyone, Jewish or not, could go on. I’m so thankful to BBYO, Genesis Philanthropy Group and their associated partners for making this experience possible for me and my peers. We must ensure that for the next generation these opportunities not only endure, but expand.

By Ashley Weinstock, who is a senior in high school and is the regional n’siah (president) in BBYO Liberty Region, comprising chapters along Eastern Pennsylvania, Delaware and parts of upstate New York.