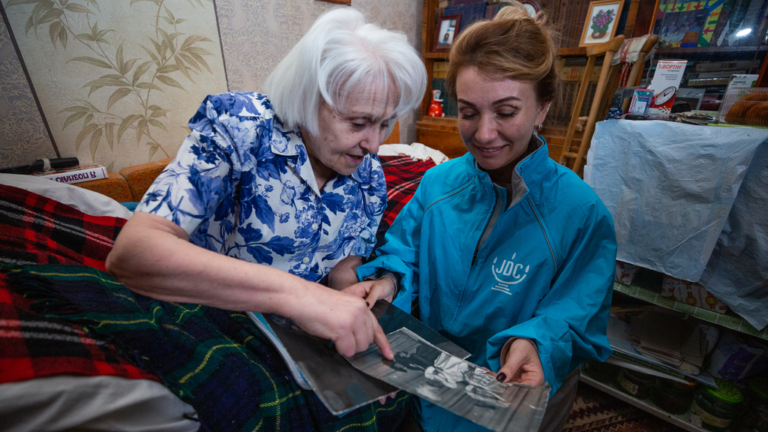 I’ve got a soft spot for Simchat Torah, the holiday when Jews around the world celebrate having completed the reading of the Torah by starting again from the beginning without skipping a beat.

I’ve always been struck by this quirk of the celebration. There is no resting on laurels, no good night’s sleep before picking the Torah up again. We go straight from Moses’s death to the seven days of creation and the Garden of Eden – do not pass Go.

And we do it with defiant joy. The Torah contains equal parts triumph and tragedy, exultation and exile – and yet we make a choice each Simchat Torah to let there be light, to lean into wonder, possibility, and new hope.

We take the Torah down from on high – out of the aron kodesh, off the bimah – and we dance in celebration. Everyone gets a chance to hold the sacred scrolls, not just the elite.

To me, Simchat Torah isn’t just a holiday. It’s deeper and more essential than that. To be Jewish is to be in constant conversation with continuity, to be forever dancing with both the past and the future. It is to understand that the story is always starting again.

I recently learned that Jewish volunteers in Moscow visited a 105-year-old woman before Rosh Hashanah, bringing her a special holiday package – apple jam, honey, and flowers.

That woman was Irena Grower, the daughter of Ezekiel Grower, the deputy director of Agro-Joint, an initiative that began in 1924 and helped Soviet Jewish shtetl dwellers living through famine become farmers.

Agro-Joint – a project of the organization I work for, the American Jewish Joint Distribution Committee (JDC) – ultimately settled more than 100,000 Jews in more than 250 Jewish agricultural colonies, primarily in Ukraine and on the Crimean peninsula.

Ezekiel was executed in a purge by Stalin’s NKVD secret police in 1938. Irena, then a chemistry graduate student at a top Moscow university, was expelled from her program and struggled for years to find work. Her father’s status as an “enemy of the people” changed the course of her entire life.

“It was a tragedy. All my friends voted against me, and I wasn’t allowed to continue my studies,” she said. “And my father was such a smart man, such a good parent. For me, this pain has no expiration date.”

Irena’s story is impossibly sad, and yet it’s also full of that Simchat Torah magic. Just when you think the story is over, it begins again.

Today, she receives homecare, food, and medicine from the organization her father worked for, and she’s visited by a cohort of Jewish volunteers that would have been unimaginable just 10 or 15 years ago.

The Moscow volunteer center, one of 44 such initiatives across the former Soviet Union created by JDC and powered by a partnership with the Genesis Philanthropy Group, is called Maagal, the Hebrew word for circle – full circle, I’d argue, and happening all the time.

“She met us, asked us where we work, where we come from, why we volunteer,” one young woman said of her visit to Irena Grower. “And how much life and energy she has! The world should know how amazing she is. I know I’m inspired by her example.”

Irena’s story is Simchat Torah in action – propelled by our values, we are always beginning the story anew. We stand on the shoulders of those who came before, and we pave the way for the next generation.

I know it because I’ve lived it. Seventy-five years ago, my grandfather, one of the only survivors of a Western Ukrainian village wiped out by the Nazis, found his way to a Displaced Persons camp after the Holocaust. As he rebuilt his life, my organization gave him a siddur and a kiddush cup, part of the aid we provided for the hundreds of thousands we helped in such places after the war.

Those heirlooms have been in my family for decades, brought out at big celebrations like weddings and bar mitzvahs and smaller joys like weekly Shabbat dinners. Most recently, my husband and I used that kiddush cup, a gift from the darkest times, at the bris of our son, who was born on Simchat Torah last year.

The story is always starting again, and that Simchat Torah magic, that special sorcery and faith that has sustained the Jewish people for millennia, is what gives me hope today.

At the end of Moses’s life, suddenly we find Adam and Eve. A Jewish professional is executed by a despot, and his daughter makes it to 105 supported by the organization he worked for, a Jewish charity that continues to operate today long after Communism collapsed.

We don’t ignore our history. We let it fuel us. Just as Irena’s pain has no expiration date, neither does her optimism and faith.

As we face a continuing pandemic, with unprecedented uncertainty and the loss of so many things we thought we could count on, built into the very fabric of our people is the knowledge that it’s never really the end.

How will we rise to the occasion? Who, years from now, will look to our example? Let’s act with passion, integrity, and dedication to care for the most vulnerable. Let’s be the people who inspire those to follow. Let’s remember, in these dark days, that the story starts here, too.