After Halle, Trying Not To Misuse The Tragedy 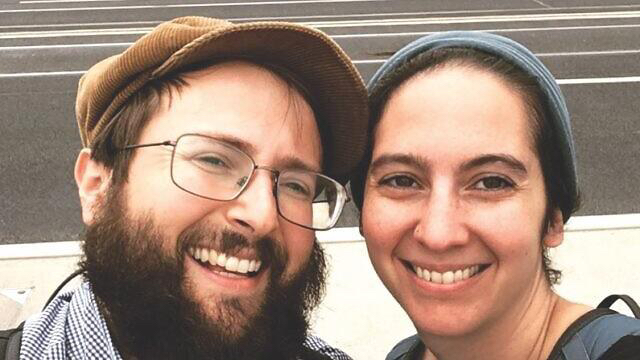 Rabbi Jeremy Borovitz, an American survivor of the attack writes about his struggle with the ‘platform’ he’s suddenly been given.

One month ago, a neo-Nazi tried to kill me, along with about 70 other Jews, while we prayed in synagogue in Halle, Germany, on Yom Kippur. We were miraculously saved, but two others tragically lost their lives when the gunman, blocked by a locked door, opened fire on those outside.

I am an American Jew who, together with my wife, Rabbi Rebecca Blady, leads a grassroots Hillel-affiliated program called Base Berlin, which offers cultural and spiritual programming for young people in Berlin and around Germany. We brought a group to Halle to pray with its small community on Yom Kippur.

I don’t want to be remembered for the worst thing that ever happened to me. But everywhere I go these days, I’m suddenly the dark Belle of the Ball. People who used to ignore me are introducing themselves to me, calling my parents to ask for my phone number or wanting to get some face time with a survivor.

Some of these encounters have been incredibly powerful and moving: my friend who lost his mother telling me to not lose myself; the members of Tree of Life synagogue in Pittsburgh who spoke of the holes that remain in their own hearts; the Holocaust survivor who, as the tears rolled down their face, just said, “I love you, I know, I love you.”Unfortunately, most people ask how we can capitalize on this experience — how this can “double our impact,” “triple our fundraising.” People keep asking me what this all means, and I’m clueless. I don’t know why we survived and others died. I don’t know what the future holds or how my life will change. I don’t know the lessons I’m supposed to glean from this tragedy, what I’m supposed to get from this tragedy, what I’m meant to lose from this tragedy. But everyone else keeps trying to give me advice.I don’t want to be remembered for the worst thing that ever happened to me — but that’s the only reason you’re reading this right now. For a brief moment in my otherwise run-of-the-mill young-rabbi existence, I have a platform. How do I use it without exploiting tragedy? How can those close to me, how can the Jewish world, use tragedy for the good without exploiting it?

The third-century Talmudic sage Rabbi Yochanan had a difficult life. According to some authorities, he lost 10 children in his lifetime. Interpersonal conflicts led to the death of his best friend, Reish Lakish. Rabbi Yochanan, a man who intimately knew mourning and grief, gives two brilliant pieces of advice in the Talmud with regards to approaching and comforting a mourner:

First, when approaching a mourner, don’t speak until the mourner opens a conversation. Second, with just a mild gesture of their head, the mourner can ask you to leave, and you are required to listen.

I’ve spent the last month inundated with interview requests, fundraising strategies and insistent offers of help. Very few of these people waited for us to speak first; even fewer took the cues of when they needed to leave. Suddenly, everyone wanted to get their hands dirty in the nitty-gritty of our project, to claim us as their own, to be tied to us so that they might stake their claim in this tragedy.There are posts on the internet telling Jews to get out of Europe — never mind Pittsburgh. There are fundraising appeals that reek of opportunism — never mind the truth. There are people telling stories of how close they were to this tragedy, how they alone staved off this tragedy. Meanwhile, of the 70 or so people inside the Halle synagogue at the time, no one I’ve spoken to has done anything but look into my eyes and share the knowledge that we survived and we still don’t quite understand how or why.

I’m angry, because I feel invisible. Everyone wants to talk to me, and I just want to be seen. A Nazi tried to kill me in a synagogue and now I have to deal with the politics and the fundraising and making sure that we don’t get erased from our own story.

The Sunday after Halle, our supervisor from Hillel International came to help out for a few days. But instead of spending his time meeting with politicians and standing in front of cameras and organizing very public and very important meetings, he washed our dishes. He made us breakfast. He took our daughter to a children’s program at the local synagogue because we needed a break. He asked us what we needed, and he listened to the answer. He cares deeply about his work — I’ve probably never waited more than 18 minutes for him to answer an email — but in his day in Berlin, he showed that he cared about us much, much more. He saw us, he waited for us to speak and after a day of folding our laundry, he hugged us and he walked away. It was exactly what we needed. From Pittsburgh to Poway to buses in Jerusalem, more and more Jews are learning firsthand of tragedy and trauma. I don’t know what this means for the future of world Jewry. But I know the pain I’m feeling, and I pray that this will help me help others, to be a better listener, to follow cues, to be helpful in a way that is actually helpful.

A few months ago, after a long road, I finally completed my rabbinical studies in pursuit of semicha, ordination. While I don’t know why I’m alive right now, and I don’t know why this happened to me, I hope it will help make me the rabbi the Jewish people will need, whatever the future holds.

Rabbi Jeremy Borovitz is senior Jewish educator at Base Berlin. In the aftermath of the Halle attack his wife, Rabbi Rebecca Blady, executive director of Hillel Germany and co-founder of Base Berlin, also wrote about her reaction to the events.