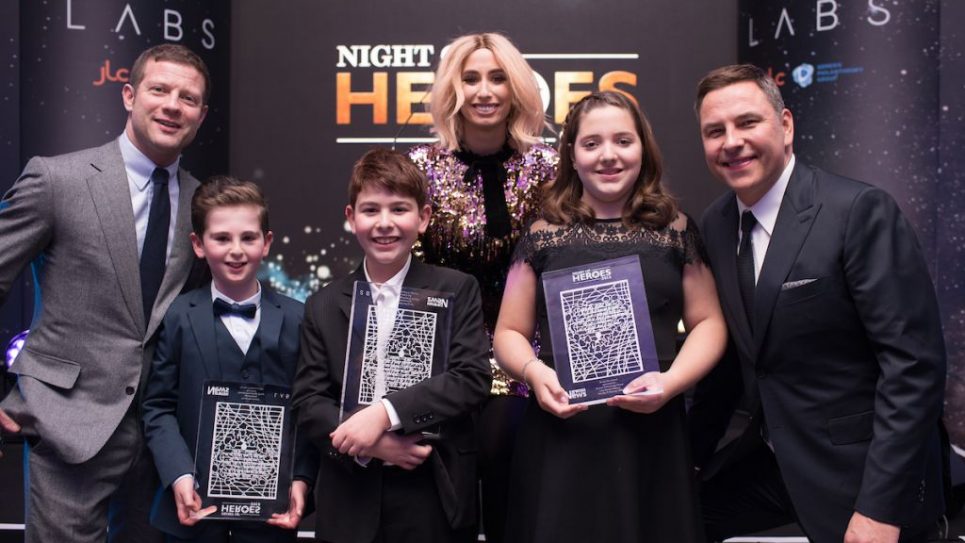 Numerous truisms wax poetic and philosophical about the ways in which a society can be measured,

but this past Monday evening, at an inspiring evening organised by the Jewish News celebrating hero’s within the British Jewish community, it struck me that the best way to measure a society is to see who they celebrate as their heroes.

According to this barometer, the British Jewish community has much to be proud of and can/should serve as a model for communities around the world.

Numerous individuals and causes, ranging from humanitarian, social, spiritual, to educational were showcased, and the highlight for many were the Young Hero Award’s, given out to Rio Woolf, Lucy Ronson-Allalouf and Zak Cohen for their inspiring charitable achievements, despite their young age and challenging life-circumstances.

Especially moving for me personally was the award bestowed upon Lucy Ronson-Allalouf, a very special young girl in our community who I have gotten to know and admire from her weekly attendance of our Cheder.

Lucy was born with a rare brain tumour and has undergone numerous life-threatening operations in her 11 short years and instead of withdrawing into her pain has maintained a very sunny disposition, choosing to dedicate herself to raising funds for disabled children.

Being somewhat more familiar with the American Jewish community having been born and raised there, I am often amazed not only by the quality and quantity of UK Jewish charities, but by their intergenerational focus and attendance.

At recent charity events I attended, younger demographics were extremely well represented, a clear indication that the Jewish value of Chesed is successfully being transmitted to the next generation.

This is not just fiscally sensible, its morally strategic.

Allow me to explain why.

It is often said that it’s not what parents say but what they do that most influences their children. The truth is that not even the actions of parents matters most (as they can be insincere) but their attitudes and reactions.

For example, the look of horror that instinctively crosses the face of a parent upon encountering the sight or sound of evil will often be the same one to cross the face of their children in similar situations. And the same is true of the glow of satisfaction and gleam of pride in the eyes of parents.

Whatever evokes that reaction in parent, will likely evoke the same in child.

Because humans are creatures of observation and habit, and learn most naturally by osmosis, the reactions people witness, especially from the people they look up to, are often transmitted to them subconsciously.

The well-known radio host and author, Dennis Prager, tells a story of a woman who bragged to him that her children were top doctors and lawyers. He asked her, “Are they good people too?” “Why of course,” she responded. And then his clincher. “Then why didn’t you tell me that first?”

And the same is true of societies and its leaders.

The hierarchy of societal value systems creates corresponding societal norms and aspirations. Thus it’s in the hands of the leaders of communities to set the agenda of the people they care to influence and mould.

As a Lubavitcher Chasid, I have often wondered: Could this be why the Lubavitcher Rebbe, of righteous memory, personally stood for hours on end each Sunday distributing dollar bills for charity to thousands of people who sought his blessing until he was incapacitated by a stroke at age ninety?

Couldn’t the precious time and energy of a world Jewish leader and unique Torah scholar be better spent dealing with macro issues relating to Jewish continuity and setting the spiritual agenda for his community and the Jewish people at large?

But perhaps the Rebbe saw those thousands of hours and interactions as his way of personally modelling the value of Chesed and inspiring everyone he encountered to be kinder and more charitable to the people around them.

Indeed, the Rebbe seemed to say as much to philanthropist Ronald Lauder during a Sunday morning “dollar-encounter,” where he explained the practice, saying: “When two people meet, something good should result for a third.”

When the leaders of a society place emphasis on goodness and kindness, the society in their care will follow.

Furthermore, if in a given culture charity is idealised and idolised, every member of that civilisation will seek ways to be charitable.

Take America, for example, whose wealthiest men at a time, Warren Buffet and Bill Gates, initiated a project called The Pledge, which reaches out to the world’s billionaires and encourages them to commit to giving away half of their wealth to charity’s of their choice in their lifetimes.

Taking this historic initiative to a whole new level, Jewish businessman and philanthropist Mikhail Fridman has committed all of his wealth to charity in his lifetime!

The effect of men like these on western culture cannot be overstated.

Just look at Hollywood, undoubtedly one of the most influential sources of social trends today, and by no means a place known for promoting traditional values, whose celebrities are popularising charity by becoming the faces of so many valuable causes. Are they all altruistic? Not necessarily. But that’s the point. If a society reaches a point where to advance one’s career and popularity one must be charitable, we’ve come a long way from the ancient world where fame and glory were attained through taking not giving, and through becoming powerful rather than helping the powerless.

Efforts like these made by respected men and women in societies the world over, and evenings like a Night of Hero’s which celebrates the power of each individual to truly make a difference, can help inspire a new generation of givers and usher in an era of generosity and compassion which our world so desperately needs.