A Trip to Ukraine Shows How Teens Are Solving Jewish Divisions 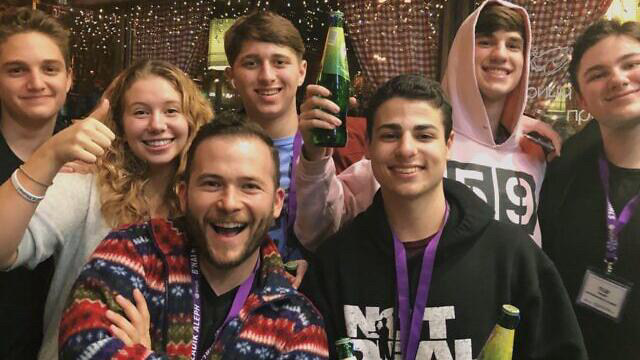 Last month, after a tearful goodbye with my parents, I headed off on a life-changing Ambassadors to Ukraine trip with BBYO.

Typically, I wouldn’t use such an impactful word to describe a week-long trip, but, in this case, it seems fitting. Born in the United States 16 years ago, I was the first person in my family to return to the land we were forced to forsake over 30 years ago.

I arrived at JFK airport happy to be spending time with BBYO participants, though I knew no one at first. Piling on to a bus eleven hours later in the Ukrainian airport, the dynamic among us had already shifted, and not only because we had just gotten off a plane half-way across the world from where we started. Curiosity and hesitation were at their peak a few hours later, over dinner in a Kiev restaurant, as our group skimmed over the table full of steaming pelmeni and odoriferous herring. Washed over by the distantly familiar smells, foreign tongues and the doting attention of our Ukrainian waiters, it was clear that we were ready to step out of our comfort zone in a spirit of togetherness.

The next morning contrasted with the night before as we visited Babi Yar, the site of a Nazi massacre of thousands of Jews. Looking over the side of the ravine, where bodies had once been stacked atop one another, brought a full-body chill along with a deeper understanding of what it meant to be a Holocaust victim. We soaked in personal accounts of individuals who summoned the strength to evade this fate and lived to spread their first-hand knowledge of the horrors. I contemplated whether I would have been able to move on, keep going, and retell what I had seen, if I were one of those few survivors. Knowing that the Shema was what these Jews were singing here, awaiting their death, we did the same. This time it was a celebration, a triumph of the Jewish people over pure evil. Now, we stood proud, alive, strong, united.  One way or another, we were the descendants of survivors and our voices soared with our spirits.  In a blur, we were swept away to a beautiful synagogue nearby, with our rabbi engaging us in song and dance. Transitioning from remembering the past to celebrating our life, I was soon part of a conga line, hearing our cheerful voices echo off the walls and seeing the light in our eyes reflect off the intricate mosaic windows of this historic building. Empowered and enriched by our first day, I knew this magical trip would be anything but ordinary. Humbled by the living history of my people, I felt profoundly grateful to be woven into the fabric of our collective journey.The next day, we were introduced to the overwhelmingly vibrant Jewish community of Kiev. We visited the local JCC to find exuberant teens involved in the Active Jewish Teens chapter there. They introduced us to the gem they created, known as “Just Jewish Dance.” A quick bus ride later, we found ourselves amongst an equally engaged Jewish community, but this time, it was the Halom Senior Center. We toured the three-story facility and were split into groups to dance and paint with the residents there. To our delight, we found them learning the choreography of a Just Jewish Dance, connecting our experiences of that day together.

Our group was transported to another hotel and conference center outside of Kiev to a gathering of over 500 teens from 15 different countries. For four days, we delved into the lives and cultures of the Eastern European teen Jewish community. We were thrown into a non-English speaking world, gorging on fried, smoked or marinated fish, mashed potatoes and buckwheat for what seemed like every meal. We did our best to try to understand a different kind of humor and found ways to create bonds with Jewish teens from the Former Soviet Union whom we didn’t always understand. I was able to translate between Russian and English speakers and get to know teens from around the world who spoke my first language. I watched as the groups, divided by a total language barrier at first, merged into one, laughing together and sharing stories. We became a living proof of the proverb: if there is a will, there is a way!

What was, in the eyes of my peers, parents, and teachers, a mere week in Ukraine, was for me an experience that transcended time and space. A journey into another world where Jews from different continents stand as one, indivisible, regardless of language barriers. A world where we are rooted in our fabled past, ready to embrace the present, and brave the future together. Maybe it was the herring, or possibly severe jet lag, but I am confident that my life changed over those seven days. I’m so thankful to BBYO, Genesis Philanthropy Group, AJT and their partners for making this experience possible for me and my peers.

By Olivia Raykhman, who lives in Brooklyn, New York, and is a junior at American Hebrew Academy. She is an active member of BBYO and previously served as Regional Sh’licha (vice president of Jewish enrichment) of BBYO Big Apple Region.