A Modern Israeli Take Revives the Spirit of ‘The Dybbuk’ 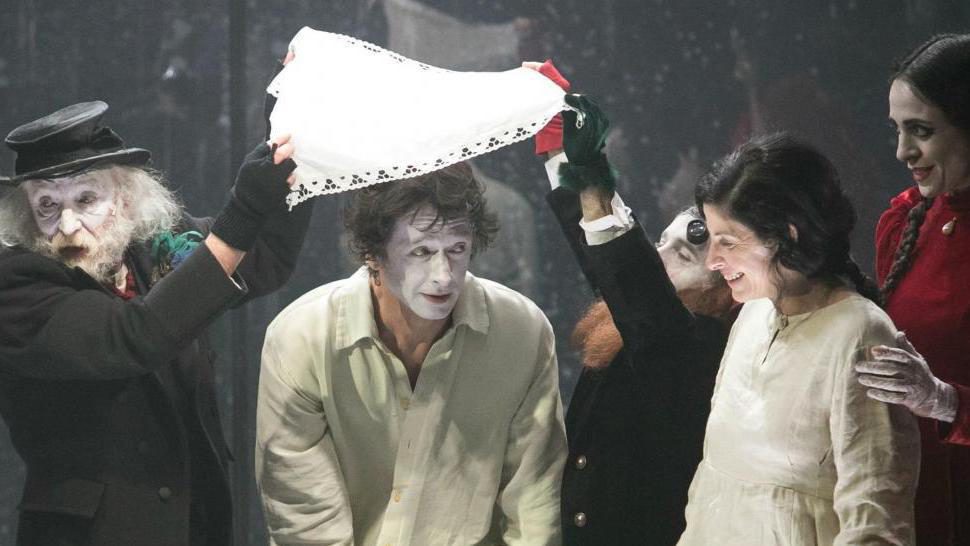 A specter is haunting Israeli theater—the specter of The Dybbuk. Perhaps the quintessential work of Jewish-Israeli drama, The Dybbuk’s century-long presence is ghostly in more ways than one. Not only does the play unfold a supernatural tale, but its close association with the origins of Habima, Israel’s national theater, gives it iconic status. As a certified classic, it is the ghost of Israeli theater’s past. A recent production by Israel’s renowned Gesher Theater, which will tour Toronto and New York City beginning late this month, asks whether The Dybbuk is also the ghost of Israeli theater yet-to-come.

It is only fitting that Gesher Theater would choose to mount The Dybbuk. The play was originally written in Russian by S. Ansky, who then translated it into Yiddish (Hayim Nahman Bialik was responsible for the Hebrew translation). Ansky wrote the play following his experiences heading an ethnographic commission in the Pale of Settlement between 1912 and 1913. The commission documented Jewish folklore and customs already rocked by pogroms and secularism, and which were soon to be obliterated by the Third Reich. Inspired by legends of Hasidic rabbis who moonlighted as exorcists of malicious spirits, or dybbuks, Ansky’s play tells the story of Leah, a maiden seized by the dybbuk of Hanan, her ill-fated suitor, and of the exorcism that frees her.

Gesher is itself a sort of cultural time capsule. Based in Jaffa, the theater was established in 1991 by Russian immigrants to Israel, under the leadership of the director Yevgeny Arye, who also directed The Dybbuk. Despite Gesher’s otherness—and relatively small size compared to the more established Israeli theaters—it quickly became a major artistic and popular success. In its early years, Gesher’s plays would be performed alternately in Russian and Hebrew. The theater’s Russia-born stars would learn their Hebrew lines phonetically. When Israeli sabras began joining the company, they would do the same for their Russian dialogue. Though Gesher no longer mounts plays in Russian, it hasn’t lost its original flavor, and it remains by far the most significant cultural contribution by the million-strong wave of Russian immigrants that swept Israel beginning in the late ’80s.

The Dybbuk has naturally received countless revivals and re-imaginings over the years, but this latest version is particularly remarkable thanks in no small part to a new adaptation by Roy Chen, Gesher’s resident dramaturge. “Ansky wrote a mystical play, and I thought it would be interesting to turn it into a psychological one,” Chen told me in a recent interview. “I set out to decipher what this dybbuk actually is. I thought the play was about a woman and her place in society. Leah is a woman who shouts out with a man’s voice because otherwise, no one will listen to her. The men who surround her tell her, ‘no, you can’t call out like that, you’re a woman, and so this voice means you must be possessed by a man!’ Her religious society concludes that she’s haunted by a dybbuk. But I’m a modern, secular person, with my own religion: psychology.”

Chen consulted with a psychologist friend, who diagnosed Leah with a dissociative personality disorder. Chen dutifully set out to write a play about Leah’s psychological treatment. But Ansky’s paranormal romance from beyond the grave kept calling to him. “Why do I have to decide what she really has, whether it’s a dybbuk or mental illness?” he asked. Chen chose to have it both ways. The result is a highly stylized but psychologically comprehensive take on Ansky’s fable. Intriguingly, this Dybbuk’s Leah and Hanan are not teenagers, as in Ansky’s original. Efrat Ben Tzur, who plays Leah, will soon be fifty, and Israel (Sasha) Demidov, who plays Hanan, is a boyish sixty-one (both are Gesher mainstays, both are superb). In a meta-theatrical nod to Habima’s legendary production, the clown-like apparitions who comprise the shtetl’s afterlife are colorfully decked out in garb inspired by the original Habima costumes. The ghost of Leah’s mother is the spitting image of Hanna Rovina, the original first lady of Israeli theater who originated the role of Leah, perhaps a reminder that Habima and Gesher both share Muscovite origins: Habima first performed The Dybbuk in Moscow in 1922 (the troupe arrived in pre-state Palestine in 1928).

Roy Chen, a native Israeli, had what he calls a non-standard youth: he was a high-school drop-out who did not serve in the army. Having fallen in love with the Russian greats in translation, he committed to teaching himself Russian. “There were Russian bookshops in Tel Aviv where immigrants would hang out, and I would sit by them, eavesdropping,” he said. “At first, I understood nothing, but I slowly learned. I was searching for the real-life versions of characters from the classics I’d read, and I found some of them.” Twenty years ago, when Chen was 19, he arrived at Gesher as a tutor, helping the Russian-born actors make their journey into Hebrew just as he was making his own journey into Russian. “I was a kind of internal immigrant, an immigrant in my own country,” he said. “Getting to know the Russians gave me the ability to see Israel and the Jews differently, with more compassion. The actors would take me foraging for mushrooms in forests outside Jerusalem. I would teach them Hebrew, and they gave me a Russian education: they’d show me cartoons, give me children’s books to read, feed me strange food. And we’d drink, of course.” After some time abroad and a stint with a Tel Aviv fringe troupe, Chen returned triumphantly to Gesher as house dramaturge and translator.

Gesher translates literally as “bridge” and it is a theater fittingly preoccupied with the notions of identity and immigration: Jewish, Russian, Israeli. Its acclaimed trilogy of plays based on Isaac Bashevis Singer novels–The Slave , Shosha, and Enemies, a Love Story–has been performed in New York, along with Adam Resurrected, a phantasmagorical take on Yoram Kaniuk’s classic novel set in a psychiatric asylum for Holocaust survivors in the Negev (but performed in a custom-made circus tent in Damrosch Park). To Chen, this Dybbuk is nothing less than a meditation on what it means to be a Jew in Israel and in the world. “For Israelis, The Dybbuk is like a shtetl that chases us. Secular Israelis treated Judaism itself as a dybbuk that we must remove, just as we bade farewell to the bible and gave it to our religious brethren, just as we said goodbye to Yiddish, just as we severed our ties with everything that represented the diaspora,” he said. “But Leah doesn’t want to separate from her dybbuk, and when she does she’s emptier than she’s ever been. I don’t think we should separate from our dybbuk either. Without our Jewish dybbuk, we’ll be an empty vessel.”

Together with The Dybbuk, Gesher will be touring another play with Chen’s distinctive fingerprints. In the Tunnel, which will be performed in New York City and Pittsburgh, is noteworthy first and foremost as a rare specimen of timely, biting political satire produced in Israel during a period where state-funded cultural institutions are under a lot of pressure to produce anything but. Directed by Irad Rubinstein and loosely based on No Man’s Land, the 2001 Academy Award winner for Best Foreign Film, In the Tunnel follows two IDF soldiers and a Hamas militant trapped in an eponymous Gazan tunnel (the play is also noteworthy for starring Firas Nassar, best known stateside for his scene-stealing turn in the second season of Fauda as the murderous El Makdasi).

The two plays make for a somewhat bipolar pair, but Chen, who wrote In the Tunnel, told me that he sees them as perfect companion pieces. “They represent the two edges of Israel, before and after, from Jew to Israeli,” he said. “Look at what happened to us over these 100 years. We were a people that dreamt of one thing, and this is what happened. Those men in the tunnel wouldn’t be shooting at one another if they didn’t have a Jewish dybbuk haunting them. It’s a Jewish-Israeli history in two plays!”